The Wolves of Willoughby Chase by Joan Aiken (1962) 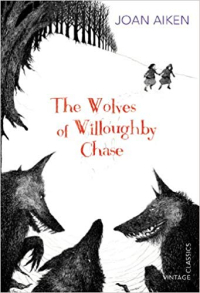 The Wolves of Willoughby Chase

Joan Aiken's The Wolves of Willoughby Chase (1962) has been one of my favourites since childhood. And, even then, I knew that the covers were awesome.

Wolves is the first in a long series of Victorian-esque novels, as Aiken's adventures are set in a slightly alternate history. In the world of Wolves, King James III has ascended the throne and wolves have migrated to Britain through an 19th century version of the Chunnel. Curiously, the alternate history elements are merely set dressing, with the titular wolves - and the seemingly perpetual winter - are used almost wholly for atmospheric tension. They do come howling through at a few moments, but largely they pad around in the distance - a soft background of danger throughout.

(I wonder if this actually qualifies as environmental SF? The winter/wolves aren't plot elements, but they do change the tone of the book. Because of the cold, stakes are higher, help is more remote, the characters' decisions feel more absolute. Plus, wolves.)

The book's two protagonists are Bonnie and Sylvia, cousins and - more or less - strangers. Sylvia has been raised genteel and impoverished in London, while Bonnie has been grown up wild and spoilt on her family's lavish estate, Willoughby Chase. When Bonnie's mother falls ill, her parents advertise for a guardian and scamper off to the continent. Sylvia comes to stay with Bonnie as part of the complex operation and, of course, hijinks ensue. The guardian, Letitia Slighcarp, of the appropriately Dickensian name, aided by her henchman Grimshaw, immediately takes over the estate and runs it to evil. The Dickensian comparisons continue as the two girls are ferried off to the care of an abusive orphanage.

Bonnie and Sylvia fall from one dire situation into another, but their world isn't entirely filled with petty villains. They encounter a bold goose-boy, an angelic maid and a quirky doctor. The good are good, the bad are bad and, if you'll pardon the spoiler: it all works out for our heroines in the end.

Although the later books in the series are more complex - and contain more surprises - Wolves is a terrific adventure in its own right. Aiken captures the many villains' nuanced forms of vileness like a combination of Dickens and Dahl, and offsets them perfectly with tiny, glimmering moments of everyday heroism. As a child, I was definitely drawn to the rambunctious, good-natured Bonnie - she makes an earnest and appealing figure. Upon rereading, it is Sylvia - who dines on single crackers, wears re-purposed bedsheets and, uncomplaining, still brings herself to match Bonnie's exuberant adventures - who strikes me as the brave one. Behind it all, Aiken's well-researched, but never heavy-handed, world-building creates a stealthily fantastical setting, and one I'm glad she returned to time and again.

An earlier version of this article first appeared on Pornokitsch (November 2013).