Where to begin with KJ Parker? 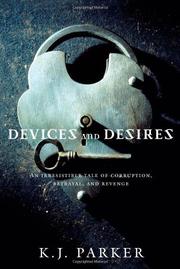 K.J. Parker is a cult author.

I don’t mean that in entirely in the colloquial sense, but in the semi-Lovecraftian way—books talked about passionately, in hushed tones, by a cabal of true believers huddled in forbidden libraries and dark corners of basement bookshops. There are those that have stumbled upon Parker’s texts and worship them with a feverish intensity… and those that haven’t and are therefore unenlightened.

Needless to say, like any other cult, we Parker readers proselytise ceaselessly. There’s a gross, cosmic unfairness to the fact that we, who have been enlightened, are surrounded by the darkness of human ignorance. But, of course, we keep trying. The stakes are too high.

And, to give some sympathy to the unbeliever, approaching Parker can be hard. There are, for example, a lot of books. Over the course of Parker’s long career, we’ve received a shelfload of trilogies, stand-alones, a few novellas, an ongoing serial and a flock of short stories that materialise at random in niche anthologies and far-flung corners of the internet.

There’s also the Parker meta-verse, which is inherently frustrating to fans of scientifically-structured settings like Sanderson’s Cosmere. Parker’s stories are kind of connected—possibly connected? Certainly similar-sounding place names? But there’s certainly not the rigorous canonisation that often appeals fantasy fans. Instead, the world is a sandbox, developing as and when needed to fit the books and their themes.

And, of course, at face value, most of Parker’s works aren’t even fantasy—or possibly even genre. They’re about blacksmithing. Volcanoes. Currency valuation. Certainly they’re all metaphors, but this is fantasy: if a metaphor doesn’t breathe fire, we tend to ignore it. And, Nate Silver aside, we’re not reading economics for fun. Yes, we cultists explain, these books have amazing battles, the most grandiose sieges, timeless romance, and the most lethal and intricate sword-fighting you’ll ever read, but really, the fun part is the bit where they’re all composing music and then figuring out how to refine steel…hey, come back!

Even as a dedicated Parker cultist, I appreciate the difficulty. So, to ease your path to conversion, here are a few ways to get started with KJ Parker. In a nod to the Parker ethos, I’ve approached this through first principles—and charted out a few different starting points, based on what you like. No need to thank me. It isn’t just my duty to lead you to one of the 21st century’s most important fantasy writers, you owe it to yourself. Sign up below. You’ll look great in the robes.

For those that like unreliable narrators and the science of wizardry…

Blue and Gold (2011) features the greatest liar and the finest alchemist in history. Just ask Salonius, the story’s narrator. He’s also a rogue and a thief and—either a great hero or a terrible villain. It all depends on where you stand. Salonius is at the mercy of his noble patron—and captor, coerced into cracking the challenges of the alchemical arts—from eternal youth to the transmutation of elements. But he’s not playing nicely.

This comes complete with a delightfully detailed alchemically-inspired ‘magic system’ and one of the most charming rogues in fantasy fiction. One of Parker’s novellas, Blue and Gold, was published as a standalone and has also been reprinted in Academic Exercises.

For those who enjoy grimness, darkness, moral ambiguity and terrifying acts of violence. Possibly featuring a grizzled veteran.

Parker’s first trilogy—The Fencer (1998—2000)—features, amongst others, Bardas Loredan, one of the author’s most compelling characters. A veteran of the city’s wars against the plainsmen tribes (in a ‘we don’t talk about the war’ kind of way), Loredan now makes his living as a hired fencer. He settles disputes in the court of combat, and, frankly, he’s pretty good with a sword. Unfortunately, no part of his past stays…well, past. His brother is an equally lethal scoundrel, but with fewer moral compunctions. A young plainsman is uniting the fragmented tribes, and remembers the Loredan name well. A local trader accidentally stumbles upon a sort of magic, and when she seeks out the help of the city’s academics, they discover that Bardas is key to a series of potentially disastrous events. Bardas seeks a type of innocuous redemption—he wants to fade away. But the combined forces of family, friend, foe and fate won’t allow that to happen.

An exceptionally brutal book, The Fencer trilogy is about—well, atrocity and its aftermath. The terrible things that human beings do to one another, often in the name of a ‘good cause’. As with all great low fantasy trilogies, expect surprises and don’t get too attached to anyone. And not for the squeamish.

For those who like the triumph of brains over brawn, complicated scheming and revenge served at a variety of temperatures.

As a standalone, The Folding Knife (2010) is, in fairness, one of the starting points I recommend most often. Basso the Magnificent is the greatest man in the land—the richest, the most successful, the First Citizen. The coins (which he mints, distributes, banks and spends) have his face on them. He’s the man. He’s got everything… so what is it he really wants? The Folding Knifefollows Basso’s rise from childhood through his many triumphs, and the challenges he faces along the way. A combination of I, Claudius and Boardwalk Empire, this is about the legacy of a Great Leader, but also the secret story of motivation, ambition and, in many ways, failure. Basso can change the world, but he can’t change himself.

(Lest this sound a bit dry, it is worth noting that it also contains a terrific heist, unrequited love, some political chicanery and a big ol’ war. For more on The Folding Knife, check out Tor.com’s ridiculously superb reread.)

For those who want a Chosen One, fate written by the gods themselves, possessed of unbounded courage and an unparalleled mastery of the blade.

…probably avoid the Scavenger trilogy (2001—2003). Certainly it has all of those elements, but they don’t really play out as unexpected. The books begin in the aftermath of a battle. A man wakes up, surrounded by his enemies but with no memory at all. As he travels through a harsh and broken land, just trying to stay alive, he begins to realise that maybe he’s something special. For one, a lot of people seem to recognise him. For another, their reactions range from the euphoric to the lethal. Whoever he is, he inspires some strong responses. Fortunately, whoever he is, he’s really, really good with a sword. Helpful in a pinch.

Over the course of the series, our hero…protagonist, learns that he was—and is still—involved in a great political and religious conspiracy, one that could quite possibly lead to the end of the world.

Scavenger is a very, very clever trilogy, but it does require a lot of attention, as our nameless hero tries to piece together the fragments of his life (a task he’s often actively trying to avoid as well). As well as tinkering with the very notion of the chosen one—as well as predestination and the apocalypse—the trilogy also introduces one of the most unusual new interpretations of swordplay. For the sword-monks (so cool, right there) have their stylised system, one that is both beautiful metaphor and deadly action…

For those that crave the truly epic, the fate of nations, the making of history, the clash of armies. Told by the great and the good, etc. etc. etc.

Two of Swords (2015) is a serialised novel that began earlier this year. Each month a new, novella-sized portion is released, and as I write this, the actual fate of empires is hanging in the balance. A proper, Martinesque multiple-POV narrative, Two of Swords has so far given us the stories of peasants, soldiers, politicians, assassins and generals. Two great empires are at war, but their forces are equally matched—largely due to their military leadership, two brothers, on opposite sides of the conflict. But as they manuever from one bloody stalemate to another, other factors and powershave become involved. A vast and mysterious quasi-religious order that spans both empires has its own, unknown goals. An innumerable legion of invaders approaches from a different land. A city-state, precariously located between the two empires, will do anything to survive. As the narrative shifts, we not only decipher the high stakes, but also the personal ones—how the war and its ‘games’ destroys lives, and how the empires are merciless in their ambition.

This is a true epic, an blockbuster story with all the elements of a great fantasy saga. (Except dragons, but, who knows—it isn’t finished just yet.)

For those that love magical systems, there are the short stories, such as “Amor Vincit Omnia” and its kin. For those that love vast sieges and the machines of war (or simply intricately plotted narratives that rival The Wire), the Engineer trilogy. For political intrigue and the tension of single combat, Sharps. For the Lord of the Flies played out with hardened mercenaries, The Company. The list goes on and on.

So grab your robes and come to the next gathering, we’re a nice cult. We may pretend to be academic and deeply philosophical, caught up on the books’ themes of evil and potential, and what it means to be human, and if there’s destiny or free will… but, ultimately, there’s a lot of fun as well.

Certainly there’s fletching and economics and a lot of time spent in forges and composing music, but we cultists know the secret truth—as much as Parker discusses the big stuff, these also contain sieges and war machines, love and revenge, magic and swordplay, conspiracies and revolutions, gods and, hell, even the very occasional dragon.

An earlier version of this article first appeared on Tor.com (August 2015).