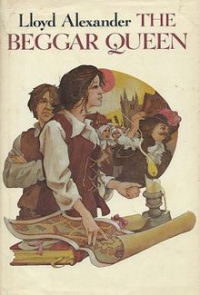 Lloyd Alexander's Westmark trilogy - Westmark (1981), The Kestral (1982) and The Beggar Queen (1984) - is a fusion of traditional fantasy, influences from other genres, and clear historical inspiration.

Westmark, the kingdom, is reminiscent of pre-Revolutionary France - a weak monarchy, a strong aristocracy and a vast number of schemers on all sides of the political spectrum. Theo, a printer's apprentice, is an accidental revolutionary. Although he thinks of himself as politically aware, he crosses the line when he prints a commission that hasn't been authorised by the authorities.

As the situation escalates, he's forced to flee his hometown, and the sheltered, if not comfortable, world in which he's lived. Theo quickly falls in with disreputable sorts - the thief Mickle, and the con-man Count Bombas - who are keen to open his eyes. Through his adventures with them, Theo begins to learn about the 'real' Westmark.

Westmark is 'fantasy' only in that it takes place in a secondary world - there's no hint of magic or the supernatural. Instead, Alexander uses a world of his own devising as a sandbox: an opportunity to experiment with ideologies in a universe clean of pre-existing assumptions. Theo is an idealist. He's an optimist and a fervent believer in the nobility of human nature. As the trilogy progresses, he's forced to reframe those beliefs in the light of war, suppression and rebellion, including acts of violence that he both witnesses and commits. The trilogy is, in many ways, the story of Theo's awakening, and the conflict between pure idealism and reality's shades of gray.

The other characters of Westmark also embody different philosophical struggles. Justin, a revolutionary, is another extreme idealist; his violent obsessions fly in the face of his own personal failings. The journalist Keller, the rebel Florian, and Mickle: they all have their own deeply-held personal beliefs, and all must make sacrifices and compromises as events progress. Even the villains - the ambitious King Constantine of the neighbouring Regia and the sinister bureaucrat Cabbarus - are portrayed empathetically. Even their most monstrous acts are shown as following a sort of philosophically-defensible, internally-consistent logic.

As with the best of young adult fiction, Westmark is also surprisingly dark. No character is 'safe', and readers expecting a traditional stableboy-to-high-king narrative will be sadly disappointed. But Westmark is also supremely triumphant. If there is an overarching lesson, it is one about resilience. Good does win out, but in unexpected, costly, and hard-earned ways. Westmark is about the triumph of the ordinary - something highlighted in the climactic conclusion of The Beggar Queen. If traditional fantasy follows the Stan Lee adage that 'great power equals great responsibility', these books highlight a more functional, but heartfelt, heroism: the struggles and sacrifices of those without power, and their determination to make a better world.

An earlier version of this article first appeared on Pornokitsch (November 2014).