The Best of British Fantasy
The Bookshelf Contribute About The Book
Fantasy Fridays
Which Witch? by Eva Ibbotson (1979) 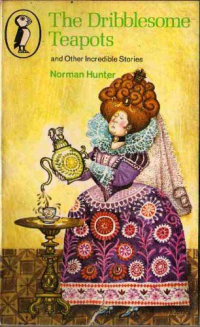 The Dribblesome Teapots by Norman Hunter

This has been one of my favourite books since I was about 7. It's a collection of surreal and funny fairytales set in the world of Inkrediblania, where a queen promises half her kingdom for a teapot that doesn't dribble, a man wears coloured ribbons on his arms to tell people the day of the week, and people are called the Earl of Lateleigh, His Decorative Flamboyance Prince Rococo of Okoko, and Ferdinand Fitzluvly (the court tailor, of course). As well as being a feat of imagination, Hunter's wordplay delights me every time I read it. It's been a huge influence on me as a writer: it encouraged me to use my imagination, make use of fairytale tropes, and play with language.

I love history but I'm a lazy reader, so evocative historical fiction will always appeal – particularly if it has a dollop of fantasy. Deathscent presents England-in-miniature as 93 claustrophobic 'blessed isles', floating in the deep darkness, where Elizabeth Tudor has reigned for 178 years. I absolutely love the mix of the pastoral countryside and its cheap and sordid underbelly. This was pitched as the first part of a trilogy, and I've now eagerly awaited the next book for 13 years.

This book is short, sinister and hugely inspiring to me. There's more atmosphere and terror in this sparse book than in many adult fantasy and horror novels. And the ending sends ice-water down my spine.

One of the creepiest stories in the series is about a nun being tied to a pillar and having her teeth removed with pliers by her class of girl-pupils. This being a children’s story the violence isn’t graphically described; instead the nun realises what’s going to happen when she remembers telling her pupils about a saint canonised by having her teeth pulled out. The story ends after this realisation: the girls approach, armed with the pliers, and the imagination is left to fill in the horrible visuals.

I find children's horror stories scarier than adult horror stories because they are all about the unsaid. They hint and they suggest and they bring your face right up close to that creepy thing and then leave you to decide what exactly it is. There's much for adult writers to learn from the playfulness, imagination and restraint of children's books.

Kirsty Logan is a professional daydreamer. She is the author of two novels, The Gloaming and The Gracekeepers, and two story collections, A Portable Shelter and The Rental Heart & Other Fairytales. She lives in Glasgow with her wife and their rescue dog. She has tattooed toes.

This article first appeared on ReadItForward.com