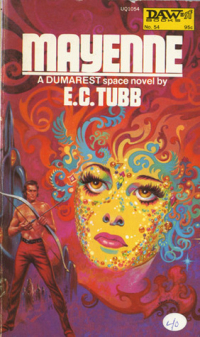 It took me over 10 years to find all 33 books in the Dumarest of Terra series, a far-ranging and rollicking set of science fiction novels by Edwin Charles (E.C.) Tubb, concerning Earl Dumarest, formerly of Terra, who stowed away as a child on a spaceship and now, as an adult, finds himself very far from home and wanting only to return.

Earl possess genetically superior luck and is inordinately fast with his reflexes when he chooses to be (mostly to the detriment of those whom he reluctantly kills who barely have time to gasp “too fast, he was just too fast….” before they die of a chest wound).

He is usually described as of medium height, with brown hair, wearing nondescript grey clothing and carries a knife in his boot (though you would not know this from the 1970-1980s UK book covers which mostly feature him in blue denim and having a blond mullet any member of supergroup Poison would have been proud to have been seen in).

He struggles against the Cyclan, a group of cybernetically enhanced humans who want to rule universe and are hunting Earl because he has the secret of the “Affinity Twin”, 15 biological molecular units that allow those injected to switch minds. The Cylan have lost this secret formula and will not stop until they have Earl, and it, in their hands again.

Counter to the Cyclan is the Church of the Universal Brotherhood, a humanitarian organization of monks who give comfort and aid when they can, the secret cost for this - to submit to hypnosis compelling one to forgo violence forever more.

You can always count on two paragraphs being reproduced verbatim about the Cylan’s cyber biotech implants the “Homochon Elements” and about the “Samatchazi Formula” which they recite as they achieve a trance state and can use the ancible tech in their heads to report to the ruling Cyclan. One never knows when, in the book, they wll pop up.

Along the way Dumarest gets into many knife fights (usually he is underestimated because his knife is an inch shorter than the standard back alley knife fighting rules consortium usually prefers) rides High (with his metabolism slowed to a crawl to eat up those long long months and years in space) and Low (hibernating in a sleep casket with a rather high probability of arriving at one’s destination dead) on countless space ships, inevitably romancing many many women, queens, thieves, cruel temptresses and even once a sentient planet. His heart always and foremost though belongs to Kalin, the woman who stole the Affinity Twin.

All Dumarest wishes to do is to return to Earth and live out his days, but he does not know the spatial coordinates for the planet, lost through time and distance and perhaps on purpose by the Cyclan. Over the 33 books he gains clues, slowly and painfully as to the possible location of a place most doubt exists.

Book 1 – The Winds of Gath- feels very much like a one-off book in that is it complete with a beginning and an ending and contains few of the later elements that would come to define the series.

There is a story that the Book 32 – The Return – was originally left unpublished because DAW books was unhappy with the ending. From what I understand it languished for years in a French only version and was only finally published a handful of years ago by an independent press.

I would like some day to reread all the books in the correct order. Buying them piecemeal over the years meant I knew some spoilers before reading how they occurred.

I do love this book series very much. It is filled with action and interesting, exotic planets (a new one dreamt up for every book) and characters but it is also filled with the humanity and decency of its main character who really just wants to end a very long journey and return home. There is a nobility and honesty to Earl Dumarest and I find him, and his world, compelling whenever I reread a book or two here and there.

Todd Sanders lives and works in Pittsburgh, Pennsylvania as a graphic designer, furniture maker, board game designer and book publisher (aanpress.com). He has a very large library of science fiction, fantasy and french novels. Needless to say, he spends much of his time in that room.