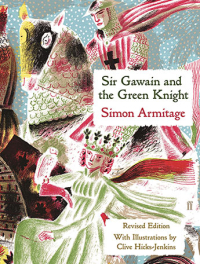 Sir Gawain and the Green Knight

The Independent gathers a list of fictional bands, including Discworld's very own The Band with Rocks in It.

In a Radio Times interview, JK Rowling continues to detail the Dumbledore/Grindelwald relationship. (The article notes that said detail is still absent from the ongoing film series.)

The rise of feminist fairytale retellings, via The Bookseller.

Another literary festival on the horizon: Stoke Newington (7-9 June).

The Bradford Literature Festival has begun to tease its programme content, with the full whack released on 19 April. Guests already announced include Chris Riddell, Alison Weir and Simon Armitage.