“I refuse to admit there is no meaning here. I will find meaning. I will force it.”
Lloyd, Phonogram: The Singles Club #6 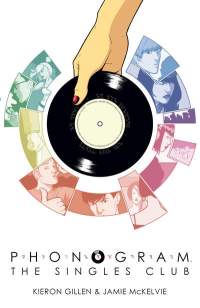 For over a half century, the use of music and magic has stayed firmly rooted in the model Tolkien created: a bardic, Bombadillian tradition of sorcerous chanting. As a result, we've had wizards extemporising poetry and forcing rhymes. It is way of creating a functional metaphor for the otherwise inexpressible: a way of objectively measuring and comparing the immeasurable and incomparable. Music, like, presumably, magic, relies on wit, vocabulary, memorisation, and artistic prowess: therefore magic-as-music become a recurring metaphor. It was a way for the reader to understand the un-understandable. Music as an expression of an individual's magical skill was, and still is, the dominant paradigm - it can still be found happily chanting away in many a high fantasy series.

In the 1990s, the technology and production of music changed (well, it did in the 1980s, but it took a while for fantasy fiction to catch up). Music was no longer, if you’ll pardon the pun, a one-man band – the bard, furiously racking his memory for demon-repelling doggerel. Music itself began to be made in layers: songs and studios, productions and distortion, sampling and remixing, a task that could involve dozens or hundreds of people… or even one vocally-challenged youth with an Amiga, a kit-bashed mixing board and an army of samples. Stage presence was no longer required – nor, for that matter, a singing voice. Pop stars may swan around like kings and queens, but, as Faithless pointed out, “God is a DJ.”

In fiction, this new model – music, and therefore magic, as a multi-part construct - was expressed everywhere from China Miéville’s King Rat to Mary Gentle’s Black Opera. Music is magic because it is such an elaborate ritual – the making of a song is no less elaborate, complex or finicky than anything Aleister Crowley would ever have dictated. If the bardic tradition uses music as an expression of one person’s magical power, the modern tradition takes into account that music is made by legions. It is a system or a science, as much as it as one person's innate talent.

Jamie McKelvie and Kieron Gillen’s Phonogram takes this one step further. Phonogram consists of three limited series published by Image Comics. Both feature the eponymous ‘phonomancers’, magical practitioners that gain their powers through music. The first series, Rue Britannia, ran from 2006 to 2007, with a six-issue story arc. The protagonist, David Kohl, is in pursuit of the titular goddess. His magic stems from – of all things - Britpop and, with Britannia missing, his magic (indeed, his very existence) is on the wane. The second series, The Singles Club, ran from 2008 to 2010, with seven sublime issues, each providing a different perspective on a single evening at a Bristol club night. A third series, The Immaterial Girl, was published in 2015, picking up on one of those perspectives, Emily Aster, and running with it.

The series is penned by Kieron Gillen and drawn by Jamie McKelvie, whose cast of perfectly-formed proto-hipsters gives the series a continuously contemporary feel. Phonogram takes place in the perpetual summertime of young adulthood, a land where jobs, rent, school and family are both invisible and uninteresting. History is subjective and the distant past is the protagonists’
mid-teens. David Kohl and his peers face concerns no more substantial than their latest-but-one relationships, their choice of evening destination and, of course, are they listening to the right music? Even if it only accomplished this – making hipster angst empathetic – Phonogram would be a success.

In Phonogram, the core theme is, as Gillen succinctly summarised it on his blog, “music = magic”. The music is the magic, whether or not humans have anything to do with it. The so-called “creators” are merely channels. Music is no longer the metaphor; a means of showing how magical a human being - or group of human beings - can be. Music itself is the purpose. Humans - magical humans - may be able to tap into it, but that's only by appreciating the music for what it is. Perhaps the great triumph of Phonogram is that no musician actually appears in the series. They are irrelevant – the ultimate death of the author.

Phonomancers themselves are, appropriately, granular. Each practitioner nibbles at one tiny portion of the greater magical whole. Penny, for example, dances. By dancing, really dancing, she stores up a certain sort of magical karma that she can spend to bend others to her will (intentionally or not). Lloyd squeezes meaning, and power, out of music at a conceptual level. Kid simply feels the beat. Even the dread “Retromancer” from Rue Britannia, feeding off crowd nostalgia, is “a kind of phonomancer”.

Phonogram effectively inverts what’s gone before. Where other works of fantasy use music as a means of expressing magic, in the world of McKelvie and Gillen the reverse is true. Music is too big to exist as a metaphor for anything but itself. It is no longer a means to describe the otherwise inexpressibly supernatural.

Music = magic, an unknown too vast to be summarised.

A version of this article was first published in Adventure Rocketship (Vol 1).