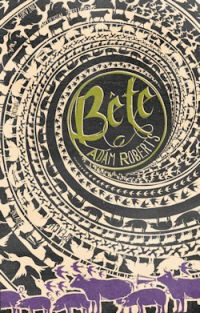 Bête is set in a world where green activists (or terrorists - depending where you stand on the story's events) develop a microchip that allows animals the power of speech. Although the initial wave of 'cunning' animals is small, the chips are easily replicated and passed on - before long, hundreds of thousands of 'Bêtes' on are on the prowl. As well as the expected results (our protagonist, a cattle farmer is suddenly out of a job as Britain goes vegan), there are great repercussions: what does it mean to be 'human'? Or a 'citizen'? To be represented, and, quite literally, heard?

Roberts is one of the modern masters of 'big idea' science fiction - a single concept, extrapolated and explored through all its various ramifications and permutations. And the talking animals of Bête are no exception - but like his literary predecessors, Roberts cleverly limits the story to something more manageable. Bête is, for example, a quintessentially British novel - along the lines of After London or even the works of John Wyndham, one gets the impression that the world extends only so far as the ocean.

Graham Penhaligon, farmer-cum-poet is an archetypical throwback to the cosy catastrophes - perplexingly overeducated and mildly conservative. Bête is also a deeply personal novel, in that this is a book not about the world - or about Britain - as much as it is a focused on the significance of a single person, Graham. Nor does our protagonist ever waver from his self-interest: even when he engages with larger social or political movements, it is with a certain reserve. He is not a man for causes - even with 'humanity' at stake.

Instead, despite the sweeping scale of the core concept, Bête is one man's journey - literally and figuratively. Graham wanders peripatetically throughout the countryside, often alone, often with a single companion. He is a stranger to man and beast, and, most importantly, a complete outsider to society. Graham essentially checks out of the apocalypse - dipping in and out of an increasingly-fragmented civilisation to buy beer. Instead, his is the story of occasional, but deeply meaningful, interpersonal contact: with another man of the road ("Preacherman"), with a strong-willed and charismatic lover (Anne) and occasionally with a particularly infuriating talking cat.

Although the comparisons to Animal Farm are obvious, Bête is probably a closer relation to Down and Out in Paris and London. This is only tangentially a novel about sweeping societal changes and incidentally a science fictional quest - Bête is about fleeting but meaningful relationships, the aching loneliness of the outsider and, ultimately, the challenge of transcendental, all-consuming love. Graham filters his emotions through literary allusions and ceaseless sarcasm (q.v. Britishness), but there is no disguising their intensity. Graham is an irascible, reluctant, foul-mouthed throwback to an earlier era of fiction - and Roberts' best character yet.

Bête is ferocious, powerful and a true beast of a book.