Where to begin with E. Nesbit?

"After Lewis Carroll, E. Nesbit is the best of the English fabulists who wrote about children (neither wrote for children) and like Carroll she was able to create a world of magic and inverted logic that was entirely her own." - Gore Vidal

"There is no bond like having read and liked the same books." - E. Nesbit 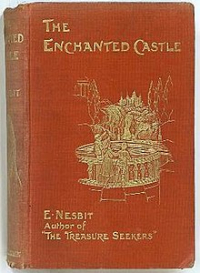 Edith Nesbit, aka Edith Bland (married name), known to most of us as E. Nesbit, lived from 1858-1924, and she had a really interesting, convoluted life. Her husband had an affair with a friend of hers, and the friend/mistress came to live with them as a housekeeper. Edith and her husband had 3 children but adopted the housekeeper's 2 children (...that wound up being Edith's husband's real children).

Everything about her husband screams "OMG RED FLAG" to me. He lived with his mother and had a kid with another woman who thought they were engaged at the same time that a pregnant Edith was marrying him. The other woman? A friend of his mother's, so he continued to live at home with mom after marrying Edith because he didn't want mom to know that he had gotten married to someone else. He apparently went broke frequently also. One website I read called him "feckless" and while I think it fits, I don't think it goes far enough. I do think of words with "f" and "c" and "k" in them though, when I read about these things...

From most accounts, Edith put up with all of this because part of her innate personality: to be a caretaker and forgiving person. But oddly enough, this didn't always translate to her kids. She appeared to run hot and cold in waves, not just with her own children but with all kids. Strange in one of the western world's most beloved authors for children, no? I found it fascinating. She has this talent and does it, and she sacrifices a lot to adopt her husband's out-of-wedlock kids with her own friend, and she loves them… but then she also just couldn't even sometimes. I get it, Edith, I get it.

One of her children died unexpectedly at 15, just before 5 Children and It was written. It has been said that the limelight-stealing character of Robert is meant to be her deceased child's alter ego. If that is the case, she found a way to give him true immortality in the eyes of all literature-loving people, and what bigger gift can one give in such circumstances?

Politics and Other Influences

Nesbit, along with others, formed The Fabian Society, a socialist group affiliated with the Labour Party. As part of this and her other social circles, she rubbed elbows with the likes of H.G. Wells and George Bernard Shaw. One of her daughters actually attempted to run away with Wells and that just amuses me for some reason (it may horrify me if I later read more details about it since I don't know the ages, vulnerabilities, etc at play here, but for now I'm just like - wouldn't it be cool to cross off "run away with frickin' H.G. Wells" on your bucket list?).

Tons of famous authors admire E. Nesbit's writing. Gore Vidal and Noel Coward, C.S. Lewis and Michael Moorcock. Edward Eager and J.K. Rowling. Indeed, the Bastable children (from The Story of The Treasure Seekers) are mentioned in The Magician's Nephew by C.S. Lewis, Michael Moorcock wrote a series of steampunk books featuring an adult version of one of those children, and Edward Eager tended to have a Nesbit reference in every book.

Like all the best children's authors, E. Nesbit, as Gore Vidal so rightly said in the quote I put at the beginning, did not write for children. Her books are about children and as such. They reach out to you as a kid and stay with you as an adult. I think the best books do this - they're not talking down to you as a kid.

While Wikipedia lists The Story of the Treasure Seekers and The Woodbegoods as her most well-known series, I tend to think of E. Nesbit in this order:

The Enchanted Castle. In the early 90s, I had memberships to not just the SFF bookclub but also a children's lit one and I got a beautiful hardcover version of this book. I hadn't read it in years, and I promptly sat down and fondled the pretty, pretty book and reread it. Three children discover a fabulous estate and castle while on holiday. This book is everything I loved in my childhood - gorgeous grounds, exploring a castle, England, and magic. [As a kid, we were camping outside Nelson B.C. Canada while there for a swim meet and a group of us went out for a walk where we found an amazing mansion and snuck into the grounds - it was the closest thing to living in an E. Nesbit book I came to. Years later, thanks to the internet, I actually found it - it's now a B&B called the Blaylock Mansion] 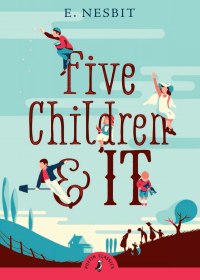 Five Children and It

Five Children and It. Published in 1902 and never out of print, this is the story of five siblings (based on E. Nesbit's children) who find a wish-granting and grumpy sand fairy. Learning how to use their daily wish and the ramifications of not wishing carefully is a part of the story, but not in a slam it over your head lesson learning sort of way. Still plenty of fun to be had!

The Railway Children. I think I read this because I loved The Boxcar Children and the similarity in names made me pick it up. I recall enjoying it but not remembering a lot about it, but it's still one of those books I think of when I think of E. Nesbit. Knowing more about her and her social views, this book makes more sense as an adult too - there is a Russian exile who was persecuted for writing a book about how to help poor people. Per Wikipedia, there were a couple friends of E. Nesbit who had similar circumstances that likely inspired this piece of the book.

The Story of the Treasure Seekers. The first of 3 books about the Bastables, and while I get that it is the most well-known probably, I tend to think of the others listed here before I think of this one. That doesn't mean I didn't love this one - I totally did. I revisit The Enchanted Castle more than any others and needed to mention it first! This is a story of six siblings trying to get their family fortune back.

E. Nesbit had a fascinating and complicated life, and we received a lot of amazing children's literature out of it that influenced reams of famous authors who in turn influenced more authors, many of whom are responsible for the awesome books we're still reading every day. If you are looking for some books to influence a great kid - or if you just want to read some classics, E. Nesbit is a great place to start.

“Ladylike is the beastliest word there is, I think. If a girl isn't a lady, it isn't worth while to be only like one, she'd better let it alone and be a free and happy bounder.”

“I think everyone in the world is friends if you can only get them to see you don't want to be un-friends.”

Heathyr Fields was raised in a small town in Washington state in the US, but was firmly convinced she belonged in a magical British boarding school. A childhood spent sipping at the well of Britain's best children's lit authors meant she had "Ideas" about the proper way to spell "colour" and "theatre" and the like in opposition those held by the tyrants controlling her grades. Now well past the age of graduation, she cheerfully adds the u's and reverse the "ers" to her heart's content.  Maybe some day she'll even get a passport so she can do a thorough inspection of antique wardrobes.  Until then, online snark and accolades will be her hallmark.