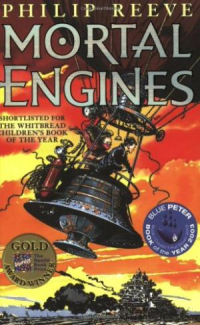 There’s something pleasingly difficult to categorise about Philip Reeve’s Mortal Engines series. Is it YA? Science fiction? Post-apocalyptic? A resource-constrained dystopia? Should it be classified as steampunk?

You could make convincing arguments for and against each of these propositions, but regardless of what you decide, it is determinedly its own thing. A wildly inventive romp, traversing continents and leaving deep impressions on every page. And, if elements of the world Reeve builds conjure echoes of Brexit, or Trump’s wall building, or a myriad of urgent environmental concerns, then that’s because the scope he plays with is so undeniably epic.

Mortal Engines, the first in the quartet and published back in 2001, begins sometime beyond the 35th Century, a long time after the Sixty Minute War, with London chasing a small mining town across the dried out bed of the old North Sea.

But urbivorous London is, by this logic, also prey. To the even bigger conglomerates of Europe, and elsewhere. Or, if the implausibly-tiered, wheeled behemoth were ever to run out of fuel and rumble to a stop, to smaller, hungry, scavenger towns; the shocking fate of once mighty Motoropolis. And then there’s the constant threat of the Anti-Traction League...

Reeve’s use of “old tech”, (MEDUSA, and unreadable “seedies”, and the chips that keep resurrected men like the stalker, Shrike, functioning) allows for flights of wild fancy, while the regression in technology avoids explaining how any of it works, keeping the writing tight. The mismatch of future and coal-fired technology enlivens the story in the same way as implausible automatons and brains in jars enliven steampunk.

Tom Natsworthy, our young protagonist and put upon Third Class Apprentice Historian, is also desperate. For a taste of adventure. To be a hero. To impress the beautiful Katherine: Valentine’s pampered daughter and the girl of his dreams.

For this determinedly cynical short story writer, Reeve’s refusal to give Tom what he wants - at least, in a palatable form - is one of many delights in this debut novel. Tom should be careful what he wishes for. The same can be said of any number of main characters, from Crome to Shrike to Hester Shaw. For a YA (?) book, Mortal Engines doesn’t shrink back from unhappy endings. The trail of destruction the plot leaves in its wake is breathtaking.

I was lucky to see Philip Reeve at the Centre for Literacy in Primary Education, for the launch of the third of his Railhead novels (another wildly inventive series). I asked him whether he ever felt the need to pull punches for younger readers?

His answer was informative, and, I hope, a justification for older fans to read (or reread!) Mortal Engines. Rather than writing for an unseen audience, he writes for the kid he used to be. Writes the stories and ideas and mashups that a younger Philip would have loved. You can pick this up in the author’s evident delight over puns like “Tunbridge Wheels”.

Mortal Engines didn’t start life as a YA novel, anymore than it started as a series of four books and spin off trilogy. (Fever Crumb, which acts as both prequel and a wonderful wrapping up of the Traction City universe.) It shed some politics along the way, but thankfully kept the mayhem.

The devastation London leaves in its tracks is described and experienced in all its horrors; a Mad-Max world of slavery, recycling, piracy and more. A mobile city offers more obvious signs of the deleterious effects of rampant consumption than our static London, where waste is whisked away unseen and the Capital’s environmental footprint spread over a large extent of England (and the rest of the world).

The brutality is evidenced nowhere more clearly than on Hester Shaw’s orphaned status, on her ruined face. She is brittle, fuelled by revenge, not initially open to Tom’s more innocent and romantic nature.

That Hera Hilmar, the actress who plays Hester in the 2018 film, is such a long way from the one-eyed, “hideous” Hester surely misses one of Reeve’s most daring statements: an “ugly” heroine.

If I haven’t focused on the Peter Jackson production, it is because I haven’t seen it. And if I mention it now with regret, it is because its poor box office performance misses an opportunity to drive a new generation of readers to the complex, multilayered book-world of Chudleigh Pomeroy, Anna Fang, The Jenny Haniver, Batmunkh Gompa, Shrike and Katherine and Hester and Tom...

And that - that is a wheel pity.

Liam Hogan is a London based short story writer, the host of Liars' League, and a Ministry of Stories mentor. His story "Ana", appears in The Best of British Science Fiction 2016 (NewCon Press), "Dance of a Thousand Cuts" will appear in The Best of British Fantasy 2018, and his twisted fantasy collection, Happy Ending Not Guaranteed, is published by Arachne Press. Chat with him on Twitter at @LiamJHogan.