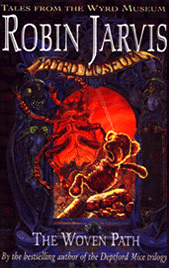 When I try to explain why Robin Jarvis’ books are so compelling to people who haven’t read his work, I reflexively reach for the word un-patronising. It’s the best way I can explain it; the reason I was so drawn to Jarvis’ books when I was young. Yet as an adult, I found myself hesitating before giving The Woven Path to a distinctly worldly ten-year-old; not because I thought he might roll his eyes at the teddy bear on the cover, but because I was concerned the book might leave him an emotional wreck.

And yet, this is precisely what I loved, and still love, about Jarvis. As a kid who was small for my age and looked younger than I was, I inevitably ended up being talked down to, and so was always on the look out for things that might be trying to patronise me. At first, I was doubtful of the Jarvis books I encountered, with their garish, cartoony covers. But then I opened The Alchymist’s Cat, book one in the Deptford Histories trilogy and…

How wrong I was.

What I found was not a fairy-tale realm of mild peril. It was grimy; it was hard and cold and the people were nasty and did terrible things to one another in the pursuit of power. There were fantastical elements yes, immortality potions and magic arts and talking cats, but they didn’t soften the sharp edges of the world, they just made them sharper and more dangerous. People were beaten to death by mobs, burned alive, murdered in vengeance. The bad guys won. To encounter this as a nine or ten year old was unsettling and surprising and totally thrilling.

Unvarnished is another word I often use when trying to describe Jarvis’ books, but it’s one that only applies to themes, characters and content. When it comes to prose, Jarvis is anything but. His sentences are almost baroque, chewy with adverbs and extruded metaphors that – in other hands – would be wince-inducing. But somehow, Jarvis makes them work; there’s a heady, gothic joy to the descriptions, and you get the sense that Jarvis is revelling in flamboyant horridness:

‘Little boys always bring trouble and heartache!’ she snapped vehemently. ‘They are dirty, lying, filthy beasts – no better than disease-carrying bluebottles. That’s what you are, Child, a germ-ridden bluebottle who requires swatting. No, not even that, for the Canaanites believed they were the transporters of human souls. You are far beneath that… A lowly, creeping, crawling worm, that’s all you are; a filament of putrid flesh writhing and burrowing within its own slimy phlegm.’

In many ways, this rich prose is a smokescreen: part and parcel of Jarvis’ Janus-faced presentation of the world. His particular skill as a writer lies in fusing the fantastical and the gothic with the grimness of reality. While the main character of The Woven Path is eleven-year-old Neil Chapman, who considers himself an ordinary boy, we also meet Edie, a child so mentally scarred by the blitz that she has lost the ability to talk, and wears an unexploded incendiary bomb around her neck, and Ted – the stuffed bear from the front cover – whose story is one of unexpected romance, tragedy and anguish. We also meet psychopathic, grasping people who do vile things; re-reading The Woven Path as an adult, I still felt the same shock at the death of one of the characters that I did when I was ten. Someone will swoop in from nowhere to save them, I thought. But, of course, no one did. And as upsetting as it is, that’s life. That’s sometimes how the world looks, without its varnish.

A few years ago, fellow author Lucy Hounsom told me about a time she met Jarvis at a book event, where she (jovially) accused him of scarring her for life as a child with the conclusion of one of his books, which was so desperately tragic, it left her crying for days. By all accounts, he was delighted. “It had to happen,” he apparently said with a smile, “it was starting to look too much like a happy ending”.

Stark Holborn writes westerns and games and is the author of the Nunslinger series. Wrangle Stark on Twitter at @starkholbon.