Where to begin with Andrew Lang? 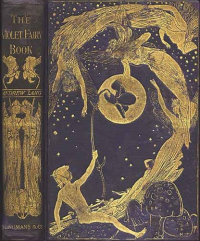 While some come to reading later in life, many of us have our roots deeply implanted as children. For me, it all started in supportive parents and amazing librarians and one spectacular independent bookstore owner, all of whom fed the imagination of a young child by mostly letting her hang out in their spaces and read all the books.  Indeed, one of the great thing about libraries is how many older books you find and how easy it is to get a wide swathe of influences because of it.

My hometown library in the middle of nowhere Washington state (USA) had a fantastic children's section with more classic children's lit authors than you can shake a stick at, including the magical "Rainbow" fairy tale series compiled by, I thought, Andrew Lang.  I can't tell you how many times I checked the various colours out, but it was definitely double digits.

Imagine my surprise when I went to learn more about Andrew Lang - and discovered that he probably should have been credited second.

Andrew Lang was born in 1844 and died in 1912, and for scores upon scores of children (and well-rounded adults), he's known as the collector of tons of fairy tales and folk tales from all around the world and compiling them into differently hued volumes.  My favourites were The Violet Fairy Book, The Blue Fairy Book, and The Red Fairy Book, but at one point or another I read them all, and now I own them all both electronically for ease of reading and in physical copy because keeping things I love close to me on my "nightstand" is what I do.  (Yes, most people have a real nightstand next to their bed - I have a six-shelf IKEA bookcase filled with a variety of collectible books and nerd paraphernalia. I sleep better if these things are near me.  I mean, my husband next to me is nice too, but he's no English and Scottish Ballads in five volumes either.  Et tu, Tam Lin?).

Anyway...I digress.  Our dear Mr. Lang was known as the editor and collector of these many volumes (and others), but even he admits in The Lilac Fairy Book that "The fairy books have been almost wholly the work of Mrs. Lang, who has translated and adapted them from the French, German, Portuguese, Italian, Spanish, Catalan, and other languages."

So yeah, his wife and a team of (mostly female) writers/translators actually contributed more than Andrew Lang did, and we remember him. It makes me kind of annoyed really, and if I had time to go back to school, I would study this in-depth, read diaries and scholarly breakdowns on this, and put all this annoyance to good use.  As I've yet to come across the winning lottery ticket to provide me this level of time, I just wanted to let every know….

While Leonora (Nora to her friends) Lang should get the credit for the fairy tale collections, Andrew himself was no slouch.  He did have several other writings, including a translation of Homer's Odyssey and various works on Scottish history.  It is fairly ironic then, that the works for which he is best known are ones that not only did he not even write, but he didn't actually have the involvement in them that he should have to gain such acclaim. I do wish I could interview them both and see how they felt about the situation - being underrepresented for Leonora and not known for his primary works for Andrew.  That could be quite the dinner conversation!

Andrew definitely dug into myth and folklore in his scholarly endeavours, however, and even headed the Society for Psychical Research prior to his death. "Psychical Research", if you are wondering (as I was), is what we now often term parapsychology. Oh, and the society is still around, 137 years strong. I love learning tidbits like that! There is definitely more to learn about the couple, but for me, the key to my appreciation lies in the books. 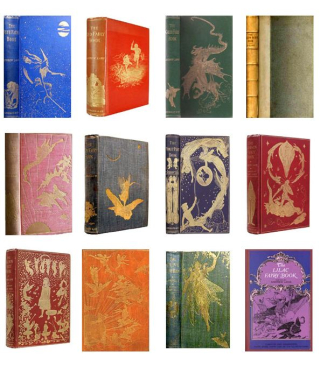 Technically, there are twenty five books, but the most famous are the twelve with colours in their names.  Indeed, I'm not sure I ever saw any of the others, outside large children's literature collections like at my university.  Certainly, my humble library only had a half dozen or so of the colour-titled ones.

For me, as a young child, these books were ways to be transported above and beyond the common fairy tales and nursery rhymes we often were exposed to. The books collect stories from around the world, often representing the first English translation for many of them, and that is impressive. We need cross-pollination and exposure to others' worlds and cultures, and the younger we start, the better. By pulling together these stories, the Langs helped small town me find the broader world and what was magical about all of it.

The Blue Fairy Book was my first exposure to tales from the Arabian Nights and directly led me to seek it out later.  It also includes my favourite fairy tale, East of the Sun and West of the Moon from Norway. The Chinese-influenced tales in The Green Fairy Book led me to wonder about all things Chinese, and I sought out mythology books and discovered The Chinese Nail Murders by Robert Van Gulik (Judge Dee series in the vein of 18th century Chinese detective novels).  And The Violet Fairy Book introduced me to Lithuanian and African tales.

These books would influence other influential writers, such as E. Nesbit, and they are books that open up a whole new world.  While it is easy in 2019 to find myriad books written by people from those actual cultures, at the time they were published - and indeed right up through when I was reading them - the world was a harder place to get around in. These were gateways to other cultures in a very positive way for me. The internet (and the much needed increase in people bringing their own stories to the world versus relying on people like the Langs to collate and translate and publish) is fantastic, but it is important too, to remember that it is actions and endeavours like Leonora and Andrew Lang's that helped set the stage and foundation for these glory years of cross-cultural sharing that we now have.

Young me is forever indebted to the fairy books and others like it. But when we look to Andrew Lang as a "Best of British Fantasy," let's please always include Leonora first and foremost. Thanks for my childhood, Leonora, I wouldn't be the same without you!

So Andrew Lang is apparently quite quotable in his other works - here are but a small few that I love:

"Distrust a course of reading! People who really care for books read all of them."

"You can cover a great deal of country in books."

"In literature, as in love, one can only speak for himself."

Heathyr Fields was raised in a small town in Washington state in the US, but was firmly convinced she belonged in a magical British boarding school. A childhood spent sipping at the well of Britain's best children's lit authors meant she had "Ideas" about the proper way to spell "colour" and "theatre" and the like in opposition those held by the tyrants controlling her grades. Now well past the age of graduation, she cheerfully adds the u's and reverse the "ers" to her heart's content.  Maybe some day she'll even get a passport so she can do a thorough inspection of antique wardrobes.  Until then, online snark and accolades will be her hallmark.

Helpful in giving insight into the lives of those who enrich our lives and help us in expanding our imaginations as we take pleasure in reading these works which they enabled us to have.

Thank you for this analysis. I grew up in the military lifestyle and discovered the colored fairy books in the Department of Defense libraries. I think it was the hardcover Dover version. I was amazed that I kept finding more colors every time I went back! Apparently, they were popular. I've been trying to find an easy to read format, with color illustrations and not too heavy.