The Best of British Fantasy
The Bookshelf About Buy the Books
Fantasy Fridays
Where to begin with Andrew Lang? 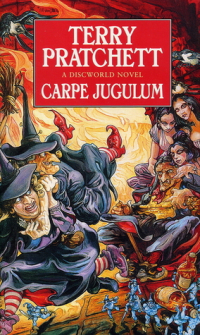 Terry Pratchett’s Discworld series is home to vampires, witches, wizards, golems, goblins, elves, and a race of Scots-adjacent ‘pictsies’ known as the Nac mac Feegle. In a world that is disc-shaped, riding on the back of four elephants, themselves positioned on the back of the great turtle A’ Tuin as it travels through space, this is hardly surprising.

There are forty-one books in the Discworld series, their setting ranging from city of Ankh Morpork to the more rural settings of the Ramtop Mountains and the leas of the Chalk. In such a vast fantasy world, it often seems difficult to make inroads, especially if unfamiliar with the series. But, as the title of Pratchett’s book reminds us, maybe it is best to simply carpe jugulum. Go for the throat.

Carpe Jugulum is set in the small kingdom of Lancre and the sixth book in the series to involve the witches of Lancre: Granny Weatherwax, Nanny Ogg, Magrat Garlick and Agness Nitt. While witches don’t have leaders on the Disc, Granny Weatherwax is the greatest leader they’ve never had. Nanny Ogg, her best friend, is less known as a magical practitioner than for her ability to drink and tell a saucy joke. Agnes Nitt is always in two minds about everything, which, unfortunately has led to a much meaner, much thinner personality called Perdita to live inside her. And Magrat (an unfortunate name caused by her mother’s inability to spell Margaret) is the kind of witch who pipes iced bats on the biscuits and has always been a bit of a wet hen. A coven always needs someone to pour the tea, though.

But things have changed. Magrat, now married to Verence, king of Lancre and former court fool, has become a mother. The Kingdom of Lancre is celebrating the birth of its new princess with a naming ceremony and everyone is invited. Nobles and diplomats the Disc over are coming to celebrate the occasion. And, for the first time, this includes nobles from the shadowy country of Uberwald. In this case, the Count de Magpyr and his family. Who are vampires. But not your regular vampires, oh no. These are modern vampires. They’ve learned. Garlic? Rather piquant. Holy symbols? Simply a matter of geometry. Some superstitions — like the inability to go somewhere uninvited — were more difficult to overcome, granted. But the king had sent such a nice invitation, with gold edging and lovely runny letters. This means that, to the Magpyrs, Lancre is their oyster. Which means that it gets eaten alive.

Some people may think that an introduction to the witches of the Discworld should begin with 1987’s Equal Rites, in which Granny Weatherwax makes her first appearance. Or maybe Lords and Ladies, from 1992, which pitted Granny Weatherwax against another powerful foe, the Queen of the Elves. But Carpe Jugulum is a book I want to press into people’s hands and tell them to read. One, because it’s fun. Pratchett’s world is comic; it sends up the world of high fantasy. (One of the Discworld’s most popular songs is, after all, “A Wizard’s Staff has a Knob on the End”.) And two, because it is one of the most human of the stories in the Discworld series. But how do stories about vampires teach us anything about being human?

This is the heart of the matter. (Please don’t drive a stake into it just yet.) Fantasy writing, at its best, like all writing, teaches us something about being human. The farther we are from reality, the more we stretch our imagination, the more, paradoxically, it bends back to reflect that reality. The joy of the Discworld is that it never loses sight of these stakes: it never forgets what it means to be human, to be in two minds about everything, to feel small in the world, to be outmatched by those faster, stronger, and more powerful. Even at the top of the food chain, humans tell themselves stories about what it means to be prey. Which says a lot more about humans than it does about vampires.

Grab it. Devour it. Eat it up. Carpe jugulum.

Paul McQuade is a writer and translator originally from Glasgow, Scotland. He is the author of Hometown Tales: Glasgow, with Kirsty Logan, and the short story collection Between Tongues (Cōnfingō, forthcoming). His short story "A Gift of Tongues" appears in The Best of British Fantasy 2018.