The Best of British Fantasy
The Bookshelf About Buy the Books
The Ascent of Rum Doodle (1956) & The Cruise of the Talking Fish (1957) by W.E. Bowman
Fantasy Fridays From my higher, dryer view I spy Mr. Mole and the Water Rat; just messing about, messing about in a boat. Gentlemen Idlers from Wind in the Willows. And down river I see the doors and paths of quiet Hobbiton. The old mill is turning, not a jot faster than it needs. And here comes our raft, in no more hurry than the mill.

No, not Huck and Jim. We see Professor Wurzle and Jonathan Bing. Also their dog Ahab. Good folk, all three. Idlers, but heroic idlers. The Professor is forever expounding Science to the amaze of the rural population. Is that not heroic, to explain sunlight to a yokel farmer? Mr. Bing is a cheesemaker of renown. He makes fantastical seasonal wheels of cheese. An experimenter with raisins and strawberries, rums and such. Another hero, whose victory is to bring joy to feasts and work-lunches of the daily world.

Ahab is just a dog. Probably famous in his own circles, for dog reasons. 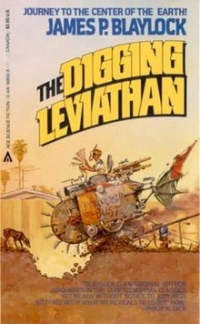 Wave as they pass. They are on that raft to save us all. In a meandering way, rather like the river itself. The wizard-dwarf Selznak has been sending skeletons clacking through the woods, goblins wandering on incompetent raids. Filling the streets with ghostly fog at night. Sometimes the dwarf himself steps dramatically from the fog, tapping his staff, puffing his pipe… only to disappear with a laugh.

No telling whether it’s Sinister Plot or random lunacy. Either way the mischief threatens the quiet river-life. Villages are being abandoned to the goblins and mad dreams. Bing, Wurzle and Ahab are determined to halt the spreading chaos. And also to shop for souvenirs. Might check out the bookstores on the way, try out the local beers.

Good luck to them! Sorry they couldn’t stop to rescue you. But if you grab that tree-root you can keep from floating after them. Excellent. Where was I? Right. James Blaylock.

Writing teacher, story craftsman. Sometimes credited with inventing Steampunk. Sometimes partners with Tim Powers. Taught early by Phil K. Dick. Has much of Dick’s style; but never the despair. Dick wrote grim fantasies of ordinary slobs; losers whose lives are endurable only by a sense of sardonic humor and a sly message: human kindness redeems.

Blaylock writes of the same slobs, but HIS need no damned redeeming. They are fine as they are. Proud to make cheeses, explain lightning to illiterates. Chasing cats. Blaylock’s characters already know that kindness redeems. Yes, they are idlers. When you enjoy life, why hurry?

Do not misunderstand. James Blaylock gives us heroes and villains, not clowns. That dwarf-mage is pure evil. Don’t go past the third floor of his castle if you hope to come down sane. Bing and his friends will face horrors in the night, in the forest, in their dreams. Do you have any idea how frightening the Goblin Wood is at midnight? What things swim beneath the surface of the same river you tread now? Ah, not that you should panic.

Blaylock: he gives us heroes and villains. That is constant in his novels, whether the setting is comic-elf land of Balumnia, tragic Northern California or gas-lamp London. Forget marble-sphincter Numinorians and gritty antiheroes shitting the iron-filings of their over-sharpened souls. Toss aside the brooding world-savers searching for a reason to fight for anything.

Blaylock’s heroes are these: all the people who like the world. They need no soul’s moment of decision to see the value of what is good. They know it. They live it.

Blaylock heroes are the sacred tribe of those who like coffee or pie or fishing or kite-flying or cats… something, anything just purely for itself. The humans who make faces in their mirrors in the morning, because they like to laugh. The world-adventurers who stop to buy a stuffed hippo-head. The friends who trek to the river at midnight to settle the ancient argument: will fish take a rubber cheese as lure?

A secret and holy race of commoners, doing things of significance only to them, their friends and their dogs. Their moral code is a celebration of life that by definition CANNOT be hurried; nor ever surrendered to practical usage. What battles may come, the Blaylock idler-hero raises his banner at the kitchen table, the tavern bar, the picnic basket, the window of the curiosity shop.

It’s the villains who rush about on Practical Matters. A Blaylock villain carries ten different business cards. And twenty different schemes to acquire title and seize control. Whether steam-punk scientist, California real-estate agent or Swamp-Wizard Dwarf, he’s a man/woman/swamp-dwarf on a horse, galloping in a blur of manic intensity. And yet, though he will pride himself on having the best car, the best clothes, the best tobacco in his pipe… while his cup runs over he watches the idlers sip vin ordinaire and growls he’s been cheated.

It drives a Blaylock villain mad to see idlers enjoying life. He knows they have something he lacks. But what? Every thing they have, he has a dozen more costly. Yet something intangible in their smiles, their laughs, their unhurried lives infuriates him.

A Blaylock villain will rage that idlers sit laughing as though enthroned in castles of treasure. While realists who Do What Must Be Done, stagger hollow with want.

Blaylock’s villains are dogs fed on bread, stomachs full yet wild-eyed with hunger. Whether mad dwarf, evil scientist, or scheming real-estate agent. They are starved. What choice do they have but to whirl and rush searching, plotting, and scheming to fill pockets and stomach? While the idler-heroes stare impressed but unenvious at the villain’s fever; then sip their coffee, go back to discussing toy potato guns.

Blaylock heroes enjoy life, and so see life worth preserving. His villains can see no value in enjoying life; what else to do but poison it? In that simple equation, for all the absurd comedy added, there lies a believability to motivations in characters we don’t find in other fantasies, whether labeled a holy ‘high’, a solemn ‘serious’, even a gritty ‘grim’.

But how could any hero find the strength to save the world, unless they enjoyed the world? And enjoying, why hurry? Heroic idlers. Good-for-nothings. Overweight, overdrawn and over their heads in the river or the plot. Worried for their lives, the world, and yet not so much that they won’t stop in their escape from the Dark Lord’s dungeon to try on a gorilla costume they find in a box.

Let us sum up with return to whispering secrets. Splash closer while I lean over the water. Closer, you don’t want me falling in. Good. Ready?

Besides the unique vision moral vision he has of heroes and villains, James Blaylock’s books are notable for blowing off whatever rule of reality or writing he wishes deactivated for the duration of the book, the war, the class or the discussion.

As Blaylock is a creative writing teacher, we are obliged to rate his results honestly. Some are A+. Some are just plain crazy-work done on the bus to school.

Read these for the quality of fantasy writing:

Read these for the fun of living:

Read this for adventure in early steam-punk:

And just because it is perfect, this award-winning short-story:

Post-note:
Please exit the river now. Class dismissed. Please leave the towels by the gate. Please don’t push the instructor into the river.