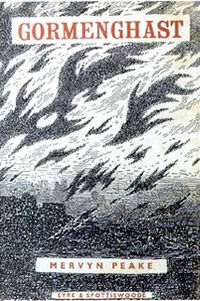 I am Mervyn Laurence Peake, author of Gormenghast. Ask me anything!

A bit about me. I was born in 1911 in central China. My parent were British missionaries. Alas, their faith did not stick. I was friends with Graham Greene and Dylan Thomas. Missionaries of a very different gospel.

Q: If you were stranded on a desert island, what books would you want with you?

A: "Life is a peninsula", one of my characters says. Ergo death is an island. I'd want the books that life did not allow. The fourth book of my own trilogy: Titus Awake. Never finished. Followed by a gloriously printed (leather bound!) picture book containing my proposed works for a sarcastic exhibition of mock art pieces by Adolf Hitler. The war department turned my proposal down. The fools! Would have been hilarious, in a gruesome way.

Q: You were a successful painter, poet, and playwright. Now remembered for your three Gormenghast novels. Do you consider those books 'fantasy'?

A: If your definition of fantasy requires wizards throwing fire, heroes questing for fairy-queens, then no. But if a vast castle encompassing bizarre peoples and ancient ritual can be considered 'fantastical', for their absurdity, their beauty, their dream-like reality of infinite age and significance... then put Gormenghast on the map between Earthsea and the Shire, just south of Anhk-Morpork.

Q: The Times named you one of the 50 greatest British writers since 1945. What do you cite as your primary influences?

A: I was an artist. I taught life-drawing. Consider that I did illustrations for Alice, for Coleridge, for Stevenson and Grimm. Now consider the strong visual description in Gormenghast, where every stone and trembling ivy-leaf achieves sharp shadow and tone. Conclude that I painted with words using for life-model all that was truly dream-like in fantasy. Not the dragon, but the boy thinking about the dragon. Not the wizard in the tower, but the tower itself. There is nothing quite like Gormenghast in modern fiction. Manners and madmen, old castles and plotting servants: these are common props stored beneath the stage for a thousand fantasy plays. But the tale of Gormenghast is unique.

Q: What chief event in life influenced your writing? And there I, Raymond St. Elmo, stop.

Because it’s fun to pretend the persona of a famous writer; but there are uniforms you cannot wear even to a costume ball unless you’ve paid some heavy dues.

Peake wanted to do art for the second World War. They took him on as a common soldier. He had a break down, got discharged. Did propaganda posters till war’s end. At which point he was commissioned by an art magazine to visit the Nazi concentration camp Belsen, still filled with dying.

The melancholy of Peake’s writing, the gruesome humor that cuts off with a bitter laugh any lasting tone of redemption or transcendence… that comes from the war.

Middle Earth is painted in fluorescents; Earthsea is sketched in charcoals. Westeros is filmed live. Gormengast is an expressionist work in oils, caricaturizing each face and pose of body into something unreal, and yet astonishes with the detail.

There he was. The infant Titus. His eyes were open but he was quite still. The puckered-up face of the newly-born child, old as the world, wise as the roots of trees. Sin was there and goodness, love, pity and horror, and even beauty for his eyes were pure violet. Earth's passions, earth's griefs, earth's incongruous, ridiculous humours - dormant, yet visible in the wry pippin of a face.

Gormenghast Castle: a near-infinite ruin of towers and halls, stairs and courtyards, within which live entire sub-tribes ruled in theory by the Earl of Groan. But in fact the only lord in Gormenghast is the sacred Ritual, an endless, weary calendar of ceremonial actions commemorating acts long forgotten.

The inhabitants are mad, in the accepted British manner of manners. They do not consider life outside the castle. Whether doctor or chef, peasant or noble, they live for the stones about them. This loyalty is not entirely a redeeming quality. There is a sense of infinite decadence in their adherence to tradition. That sense of oppression by time and tradition becomes the real foe of Titus Groan, the eventual protagonist. Granted, he must also face perhaps the most competent, manipulative villain in modern literature: Steerpike.

If ever he had harboured a conscience in his tough narrow breast he had by now dug out and flung away the awkward thing - flung it so far away that were he ever to need it again he could never find it. High-shouldered to a degree little short of malformation, slender and adroit of limb and frame, his eyes close-set and the colour of dried blood, he is climbing the spiral staircase of the soul of Gormenghast, bound for some pinnacle of the itching fancy - some wild, invulnerable eyrie best known to himself; where he can watch the world spread out below him, and shake exultantly his clotted wings.

What is the plot of Gormenghast? The true story is the life of the castle itself. Sure, a vicious murderer poses himself against the castle and its heir; but that is a side issue. The first two books dazzle with description and characters in the day-to-day of an absurd but believable social order grounded in ruin and tradition, decay and absurd dignity.

The third book will remove the protagonist from that world, bringing him into something sinister and heartless as the real world. There he will wonder whether he dreamed his fantastical castle home. It is a feeling the reader will share; that they are coming from an ancient, impossible, heart-breakingly innocent world of stone and ivy and ritual.