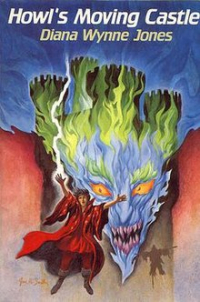 I didn’t discover Diana Wynne Jones (DWJ) when I was a kid. Perhaps I got my timing wrong; DWJ’s first children’s book was published in 1973, but many of her works were quickly out of print, only returning decades later on the back of JK Rowling inspired popularity for all things wizard. Which, given JK and many other writers, including Phillip Pullman, Neil Gaiman and Terry Pratchett, cite DWJ as inspiration, would be ironic if it didn’t show how publishing skews the very markets it creates.

Howl’s Moving Castle (published in 1986, by which time I had already moved on from fantasy to science fiction and, um, Agatha Christie) did slow business on its initial release, winning the Phoenix Award twenty years later, a couple of years after Studio Ghibli turned it into a box-office success as an animated film.

I am only now making amends, with the lame and utterly transparent excuse that my teenage nieces are the real audience I’m eagerly snapping up DWJ’s books for.

Because although they’re children’s books, and yes, I am a fifty year old man, there’s something about DWJ’s writing that puts her in a different league from Rowling. Perhaps a different seven leagues.

DWJ’s young wizards are flawed. They are frequently selfish, vain, and sometimes downright cruel. Basically, they’re very, very human, albeit with powers that accentuate their foibles. While there may be external evils to defeat, quite often their stories are more about bringing developing magical powers under control. Especially when there’s more than one wizard in the room, and there often are; boarding schools and siblings feature high.

This bucks the trend of what young - and not so young - readers might expect. We think we know the story: a good wizard must master (his) talents before the rising evil descends. Sometimes with an optional temptation, along the way, but we always know the good wizard is a good wizard.

DWJ makes fun of such fairytale expectations. Howl's Moving Castle begins with the eldest of three daughters lamenting, because everyone knows it will be the third and youngest that goes on to find her fortune. Fuelled by the books she devours, she knows she’s predestined to fail, and accepts her lowly status as shop assistant, even while her sisters are busy not accepting theirs.

That the young eldest daughter, Sophie Hatter, spends the bulk of a young adult novel positively ancient is another unexpected delight. Combined with Sophie’s ferocious temper, her untapped and somewhat chaotic magical talent, and a cast of characters including a fire demon reluctant to bow his head to cook bacon, and the book is packed with comic humour, no more so than Sophie’s first attempts to use seven league boots. I defy anyone to read that section and not smile.

It’s also a book about love. Not always very suitable love. There are enchantments and confused identities aplenty. And there are scorned (and very furious) women/witches, not entirely without reason.

Howl himself is set up from the start as a monster: “known to amuse himself by collecting young girls and sucking the souls from them”. It comes as a surprise when Sophie discovers he has a heart, and where that heart is, exactly.

Because not everything is as it seems, Howl’s castle least of all. In common with many of DJW’s works, Howl’s Moving Castle is set in a magical multi-verse, with different types of magic in different versions of the world. In some, magic is outlawed. In others, magids are high in government (an inspiration for the Ministry of Magic?). Some of these worlds are very, very similar to ours, even if in the one Howl originates from people do doctoral theses on charms and spells and powerful curses get embedded into classical poetry (John Donne’s “Go and Catch a Falling Star”).

There’s a lovely scene in The Merlin Conspiracy, in which the young heroes chase a goat across stepping stone realities. Which is only one of many ways of navigating between them - Howl’s Castle employs a quite different approach.

Another common factor in DWJ’s novels is a sense of bewilderment. Mysteries abound, and only get explained, let alone resolved, as the story nears its conclusion. It’s sometimes best to sit back and enjoy the wildly inventive ride as destiny unfolds and the unlikely terms of the curse are met, often accidentally, often helped along by Sophie.

But then, I never solved any of Agatha Christie’s murder mysteries before the final reveal, either...

Perhaps you’ll do better. And, if you’re a young adult who devoured Harry Potter and is looking around, blinking in the unaccustomed light, asking what to read next, then latch onto Diana Wynne Jones. I should think you’re just about ready.

Shall I point out how much I envy you?

Liam Hogan is a London based short story writer, the host of Liars' League, and a Ministry of Stories mentor. His story "Ana", appears in The Best of British Science Fiction 2016 (NewCon Press), "Dance of a Thousand Cuts" appears in The Best of British Fantasy 2018, and his twisted fantasy collection, Happy Ending Not Guaranteed, is published by Arachne Press. Chat with him on Twitter at @LiamJHogan.