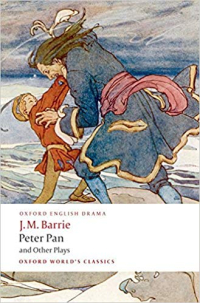 In “Peter Pan,” J.M. Barrie merged two realms of expertise. One was the games of make believe he played with the Llewelyn Davies boys, whose guardian he later became. When an adult is immersed in such role-playing, characters may evolve who endure as archetypes long after the children outgrow them. It was under these conditions that the world-building for “Peter Pan” took place. One's inner critic might balk at having Red Indians, fairies, mermaids, and pirates in the same story, but children lack such inhibitions, switching from one role to the next without breaking stride.

Barrie's other realm of expertise was in writing theater plays. During the rehearsals for “Peter Pan,” Barrie noted, “a depressed man in overalls, carrying a mug of tea or a paint-pot, used often to appear by my side in the shadowy stalls and say to me, 'The gallery boys won't stand it.'” But by this point in his career as a playwright, Barrie had a good idea what his audience could take.

The first mention of Peter Pan in print is in Barrie's 1902 novel “The Little White Bird,” where we are told that “he plays exactly as real children play. At least he thinks so, and it is one of the pathetic things about him that he often plays quite wrongly.”

But it is Pan's theatrical incarnation that endures. First performed in London in 1904, “Peter Pan” has that twee yet terrifying, elegaic mood so pervasive in British fantasy. The whimsy is on the surface; the underlying vision is bleak. The play's most subversive feature are its stage directions, which are conspiratorial in tone – one feels personally addressed by the author as an initiate – and constantly intimate the story has layers we should avoid looking too deeply into, a technique to draw the reader in.

Peter Pan is an abductor of children with “a perplexing way of changing sides if he is winning too easily.” In Dungeons and Dragons terms, he might be called a chaotic neutral.

Captain Hook, as if to confound anyone seeking to comprehend the creative process, was first added to make time for a set change. Barrie first thought the play needed no villain, Peter Pan striking him as a disruptive enough character already. It was to make time for a shift of scenery backstage that Barrie gave a scene stage-front to the pirate chief, who it then became clear needed more scenes. The only real grownup in Neverland, Hook is an adult playing with children, deeply aware of his own mortality, which is obtrusively symbolized by a ticking crocodile. One reason Barrie makes such a big deal about Hook having been to Eton is the play of words on “eaten.” Barrie incidentally sent most of the Llewelyn Davies boys to Eton, which signifies the end of childhood, a place Peter Pan never has to go.

Authority throughout Barrie's work is portrayed as alarmingly tenuous and transient. Children's games are a form of rehearsal for adult life, which itself turns out to be an unsatisfactory sort of game – hence the improvisational nature of the struggle between Pan and Hook, a rote affair for Pan, while Hook knows it must end in his being devoured. Unlike his later Disneyfied incarnation, the Hook described in the stage directions leaps into the crocodile's mouth with a kind of relief, “like one greeting a friend.”

Afterwards the stage directions warn us the curtain must not rise again lest we see Peter “on the poop in Hook's hat and cigars, and with a small iron claw.” Interestingly, the Disney version does let us see Peter wearing Hook's hat, but manages to render this an untroubling vision.

It is because Peter Pan will never grow up that he does not care, or necessarily even remember, who wins. Other secrets about Peter Pan the stage directions let us in on are that no-one must ever touch him, except fairies, and that he doesn't weigh anything. The logical conclusion would be that Peter Pan is actually a ghost – dying is after all the only way never to grow up – but that people are too polite to tell him. But Peter Pan and Hook are like characters out of myth; not all of their lugubrious backstory can be unpacked.

Barrie's Scottishness comes through in his having a particularly dark heritage of fairy kidnapping stories to draw on, in Hook's unaccountable resemblance to Charles II, and in the pervasive glamour -- using the word in its old Scottish sense -- that the play continues to cast.

James Warner was born in Portsmouth and currently lives in San Francisco. His stories have appeared in Interzone, ZYZZYVA, Ellery Queen's Mystery Magazine, and elsewhere. He is sometimes seen busking in subway stations. His story "Twelve Answers Only You Can Question" was included in The Best of British Fantasy 2018.