Where to begin with Shirley Jackson? 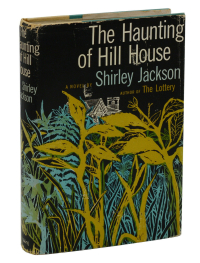 The Haunting of Hill House

[She's not British, but she is the best. In honour of 'Shirley Jackson Day', we wander across the Atlantic to celebrate one of the true greats.]

‘After you, my dear Alphonse’, as the Jackson story goes. One of my favorites. Mind if I lock the door? Or the draft will push it open. Sit, and let us talk of Shirley Hardie Jackson. Born in the days of radio-soaps and silent movies, she extends her voice past the age of TV and The Bomb. Remember ‘The Bomb'? Sounds like a bad 60's movie. But it chimed a constant note of background anxiety through daily life. A writer like Jackson picked that up, sure as a medium catching spirit-vibes in a horror fantasy.

But you ask, is Jackson a fantasy writer? Good question. Let’s divide fiction’s empire in halves. 'Real world’ narratives where all exists in accord with what we agree is observed. And that step-child dream-land of ghost and shadow: fantasy. Is there a border? Of course. The eye. Fantasy takes place on your side of the eyelid. Reality is out here on our side. Is it always clear where the writer turns the gaze? Easy if you see elves and orcs. But city traffic, phones and rent-bills have their icons within our heads. Consider that stain on the floor. In 'realistic' fiction it is mere chemical memory of blood on old wood. In fantasy it is foreshadowing, giving uneasy recognition. I see a face in the stain, rather like your face.

Let’s take two of Jackson's 'supernatural' novels: The Haunting of Hill House and The Sun Dial. 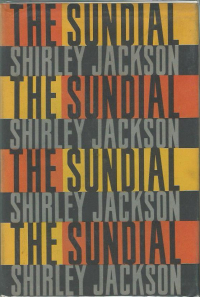 Tales of haunted minds in haunted houses. That one-sentence description immediately recalls the great homage to Shirley Jackson: Stephen King’s The Shining. A ghost-filled hotel prowled by a caretaker with a head full of ghosts. Perfect metaphor for the mind in torment. Note we do not question the reality of King's spooks. We admire the symmetry between the haunting within Jack's head, and the haunting outside. But King praises Jackson for keeping her ghosts more subtle. Turn the screw as you wish, still you wonder: do the specters lurk in the crinkles of a cursed brain, or in the walls of the cursed house? A Jackson reader will always shiver at the realization: there is no difference. The human head is a haunted house. And with that insight the reader joins the ghosts in the story.

No live organism can continue for long to exist sanely under conditions of absolute reality... Hill House, not sane, stood by itself against its hills, holding darkness within… whatever walked there, walked alone.

- The Haunting of Hill House

A ghost: any mad thing trapped within itself. Yet to read Shirley Jackson is to enter her house and join in the haunting. You cease imagining a dark hall where the heroine tiptoes. Now you begin walking beside her, holding her hand, exchanging whispers, laughter, secrets… only to realize you hold the hand of a ghost. But don’t scream. Jackson's haunts never drive anyone away. Not them. They write in blood on the walls: 'welcome home!’

You stare at my walls? Yes, there was writing there. New paper never hides the darker stains. It only reveals what most frightens us, no matter the layers we apply. Ms. Jackson puts onto paper fears more subtle than clichés of hooks and chain-saws, formula-frights of campfire tales. “I delight in what I fear,” declared Ms. Jackson in a rare explication of her writing, of herself. And she bravely analyzes her fears, scribbling notes like a coroner studying a fascinating death-wound.

Take a house filled with ghosts, the frightened protagonist within. Now remove the house. Now remove the ghosts. What remains is the frightened mind itself. A ghost story with all ectoplasmic props dismissed. Jackson gives us two novels with this formula. "We Have Always Lived in the Castle", and "The Bird's Nest". Each chimes with that background vibe of anxiety; ‘The Bomb’ about to scream. The reader sits on the edge of a fearful realization… rather like you sit now. Relax! It's just my letter opener. I tend to fiddle with it.

“I can't help it when people are frightened," says Merricat. "I always want to frighten them more.”

- We Have Always Lived in the Castle

Now “The Bird’s Nest” is a tale of multiple personalities. A self haunted by broken pieces of self. Sounds academic; yet terrifies as any scene of demonic possession or Ouija-board séance. And yes, Jackson suffered fears of disintegration. She endured the 20th century couch-and-therapy inquisition. No doubt ghost-writing the story as she closed her eyes, the better to observe within.

I saw that Beth now, looking about her and drawing herself together, was endeavoring to form herself, as it were; let my reader who is puzzled by my awkward explanation close his eyes for no more than two minutes, and see if he does not find himself suddenly not a compact human being at all, but only a consciousness on a sea of sound and touch….

Excellent suggestion. Lean back, shut your own eyes. Lock yourself into your mind’s house. How long till you become a ghost wandering dark halls? Do you dare a mirror? The stairs to the dank basement? The lonely, silent attic? Perhaps a walk through the garden labyrinth? A Jackson character knows that the great wall dividing reality and fantasy is just the skin of the eye. No need for dark mansions! Her creations can walk a city sidewalk in horror, realizing that below the concrete is a reality of dark holes where dirt and worms await. Else march gloating, picturing dead bodies to stamp upon happily. Or glance backwards, spying a stranger following, wearing a face from childhood nightmares... A Jackson story is a ghost-tale told within the ghost’s head; and Ms. Jackson is the ghost. 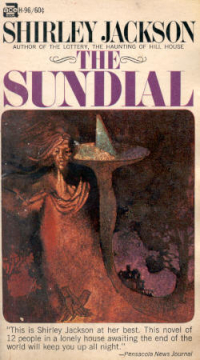 Elizabeth, Eleanor, Fannie, Constance: frightened and introspective characters. Bess, MerriKat, Orianna: psychotically self-confident. But all, all haunted. Why does Jackson specialize in haunted female minds? Why fixate on the alteration of timid, vulnerable women with confident mad-women? No mystery there. A gifted writer, Jackson married a professional critic. There’s a horror plot for you. As an ‘academic wife’ of the mid-20th century Jackson was marginalized; as a writer of female characters she was patronized. You see the XY chromosome-contempt in the reviews of the day: she wrote whispered thoughts of women, not shouted words of men. Depressed, she was dosed with barbiturates and amphetamines chased down with martinis and Lucky Strikes. Her weight, esteem and health went up and down like the elevator of the Overlook.

But we must not forget: Shirley Jackson did not write only to frighten. She also wrote wonders of comic domestic life. Houses don’t just have ghosts. They have kids and dogs running in and out the backyards, sunlit kitchens where grownups sip coffee discussing the horrors of Parents’ Night. There are times when a home is tormented not by spooks but the flu. Jackson wrote hundreds of short-story jewels to be inset into domestic crowns like “Lady's Home Journal”, or that 20th century Tiffany's display of correct writing: The New Yorker. It was in The New Yorker where she first won the writer’s lottery.

And so we come to that story. People across the world wrote asking to attend this annual New England ritual of corn-fertility and sacrifice. They didn't understand which side of the eyelid she wrote upon. You and I do, of course. Granted, the room grows dark. I scarce distinguish my shadow from yours. So late, so soon?

But we can’t blame those confused by ‘The Lottery’. Its power glows in its absolute muggle-mundanity. It depicts small-town folk sinister as the slats of a white picket fence. Not secret vampires, not deformed Lovecraftian frog-folk. Consider: for decades American schoolkids have read that anthologized tale of chatty neighbors gathering, gossiping, then performing ritual murder. With no explanation but it’s just what regular people do. In their heads, anyway. So why not outside it? Jackson worried about war, racism, the Bomb. Outward manifestations of the inner conflict, as pop-psyche teaches. When South Africa banned 'The Lottery' she declared they understood it exactly. 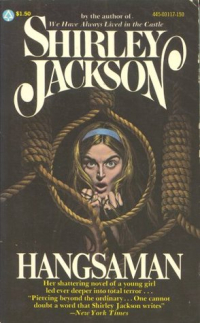 Well, that’s done. I’ll clean up later. Where’s that key? After you, my dear Alphonse? No, I suppose not. Rest, then, while I write the last words upon the wall; not in ghostly hint but loud declaration:

Comic or horror, psychological or domestic, a Jackson story invites you inside the house of her mind. A fascinating place, whether she chooses to frighten or amuse. In her writing you feel a firm grasp guiding you through dark halls, patches of bright light, rooms of fearful faces and laughing children, mirrored and mirroring. You wonder whose hand you clasp? Relax. It's just her hand.