The Best of British Fantasy
The Bookshelf About Buy the Books
Where to begin with Shirley Jackson?
Fantasy Fridays 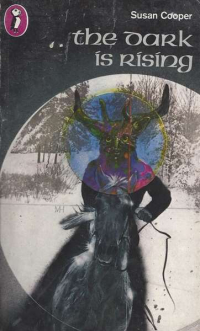 The Dark is Rising

I discovered Susan Cooper’s The Dark is Rising Sequence as an adult and immediately loved it. Imagine if one of Blyton’s more adventurous stories tumbled into a cauldron with Garner’s The Weirdstone of Brisingamen and brewed a hybrid offspring. That’s Cooper’s unique voice: at turns cosy and comforting, eerie and vast. Like her golden-eyed Herne, Cooper is a hunter herself, setting traps for the unwary. Enjoying a bit of mild peril on the Cornish riviera, you turn the page and snap – epic fantasy has you in its jaws. Suddenly Cooper’s young heroes are pursuing the Grail itself, unravelling ancient manuscripts, and trying to grasp the fact that they are the only ones who stand in the way of the Dark.

The endless struggle between Light and Dark (read Good and Evil) is the backbone of fantasy. While it would be easy to fall into conventional descriptions of these polar opposites, Cooper’s language is, above all, humanist. Rarely do the creatures of Light and Dark outwardly resemble their nature. The Rider of the Dark is no horned demon, but a man with red hair and blue eyes. Similarly, the Old Ones of the Light come from all nations and walks of life. The one thing that unites Light and Dark is their unflinching dedication to their respective causes no matter who is hurt along the way. This is an important indicator of Cooper’s central argument: that absolute good and absolute evil are inflexible binaries. Neither can inherit the earth. It is why the Drew children, Simon, Jane and Barney, are needed.

In between speaking words of power, eleven-year-old Will, last of the Old Ones, tucks into hearty roasts, goes fishing, helps on his family’s farm: because the struggle between good and evil is found in the everyday, as well as in fantasy battles. In Silver on the Tree, Will and his brothers encounter bullies beating up a Sikh boy. When the ringleader’s father appears, Will gets his first taste of the Dark that lives – not in the Rider – but in the hearts of men. This distinctly human display of casual ignorance is so much more chilling than the monsters of the Dark. And in fact, the final battle pales in significance when compared to the gargantuan nature of the struggle that faces Will and the Drews going forward. Pervasive evil is rarely as obvious as true evil.

Cooper’s mingling of ordinary life with the stuff of fantasy is unselfconscious. And it rings true: beneath Britain’s streets, lazy hamlets and faded seaside resorts, lies a wealth of myth. Cooper’s particular gift is the way she weaves it seamlessly into the present, uniting humans and human experience across time. If you want a sense of the English, you’ll find it in the pages of these books. We’re a patchwork nation of many peoples, a fact Cooper takes pains to point out. ‘I’m all of those things mixed up, I suppose,’ says Barney, the youngest of the Drews, ‘Norman and Anglo-Saxon and Dane.’ While she utilises the Arthur myth, Cooper’s is no king-under-the-hill saviour narrative. The Drews, with over a thousand years of history behind them, are the children of tomorrow, the ones with the power to change the world. This is especially poignant now with so many young activists standing up for our planet.

Cooper is a master storyteller. Will’s four-pages-long journey into the Book of Gramarye is one of the finest pieces of fantasy writing. And if you read The Dark is Rising in winter when the cold is cruel, I guarantee sentences like this will hold you spellbound –

In the first shining moment he saw the whole strange-familiar world, glistening white; the roof of the outbuildings mounded into square towers of snow, and beyond them all the fields and hedges buried, merged into one great flat expanse, unbroken white to the horizon’s brim.

When Merlion who goes by many names tells the children that they will remember nothing of the battle between Light and Dark, I felt the same bereavement as I did at the conclusion of The Lord of the Rings. When the host of the Light sails in Arthur’s ship, Pridwen, to the castle at the back of the North Wind, the sense of magic fading is palpable. Only Will, as an Old One, remembers.

I for one cannot believe that the children forget entirely. Particularly Jane, who shared a connection with the mysterious Lady. I like to think that she, as Merlion intimated, dreams of the struggle between Light and Dark, in snatched archetypal fragments. I imagine she feels there is something missing in the world, something indefinable and shining. Maybe she finds herself searching for it, always, and filling journal pages with her thoughts. Maybe she becomes a fantasy writer, like me.

Lucy Hounsom is the author of The Worldmaker Trilogy published by Pan Macmillan. Her first book, Starborn, was shortlisted in the 2016 Gemmell Awards for Best Fantasy Debut. She is a Waterstones bookseller who co-hosts the geek feminist podcast ‘Breaking the Glass Slipper’, shortlisted for a British Fantasy Award in 2018. She lives half the time in Devon with two cats and the other half in Skyrim.