The Water Babies by Charles Kingsley (1863)

Let us understand a man by creating him. 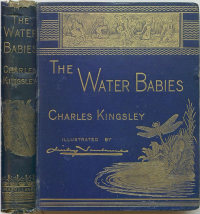 We'll need a work space. A busy street-corner will do. There we'll study him as he studies others. London, why not. In the mid 19th century. Popular enough to easily picture; distant enough to give perspective.

Excellent. Now we begin our Adam. Shape him on the curb, don't put him in cart traffic. Mold a tall thin fellow, leaning against a tall thin lamppost. Mutton-chop whiskers, sardonic smile. But that's mere container. What fills our man in? His stuffing must suit the time and place.

We've plenteous ingredients. Mid-19th century Britain is an explosion of human parts, speaking metaphoric or actual. So many new concepts in religion and science, art and industry, law and rebellion. Progress in every art from music to mass murder; every science from the physics of light to the casting of steel slave chains. This imagined corner is a pulse-point of revolution and reaction, flowering ideals, devouring greeds. Bah. Throw them all in! We'll construct a fellow who contains within himself all the warring pieces of the 19th century. Ambitious, no?

Religion must be a major part, yet also free thought. Toleration… to a point. Past that point: the steel fist of Established Doctrine. Make him a supporter of trade unions, yet acknowledging a lord's rights to serfs and servitude. A social progressive who stands as firm pillar to Empire and Status Quo. A Christian Socialist equally at home in labor rally, royal court, bishop's chapel and bank. Let's mix these contradictions into our man. Will they alloy, or explode?

Conceived and done! Clipboard out now, to note observations. A dog trots past: he smiles. A child stumbles carrying a heavy basket. Note: our man's eyes sadden. A drover whips a horse; our man scowls angered. Now comes all a family pulling a barrow. Ragged clothes, scarves and bits of cloth to keep warm. Our man shakes head sympathizing. Until they pass chattering in Irish... Note our subject's expression. It changes fast as flipped coin from sympathy to distaste. An African sailor receives amused disdain. A Rabbinical sort gets flat frown. Beggar child of indeterminate nation: receives a shilling and a smile.

Preliminary conclusion: our man loves animals, loves children. And humanity, to the degree they incite his pity or remind him of his mirror. Note how he leans back, eyes distant? Hypothesis: he's now watching himself watch humanity. Our man's no fool. He's aware of his faith’s call to love, to caritas. When he stares in loathing at an Irish beggar, when he thinks how cleaner the street would be for lack of Jews and Africans, the contradiction shall prick him.

Caritas and Empire; the two do not sit well together in the soul. What can our man do to resolve the debate within? Exact as we; he creates a person to experiment upon.

Once upon a time there was a little chimney-sweep, and his name was Tom. That is a short name, and you have heard it before, so you will not have much trouble in remembering it. He lived in a great town in the North country, where were plenty of chimneys to sweep, and plenty of money for Tom to earn and his master to spend. He could not read nor write, and did not care to do either, and he never washed himself, for there was no water in the court where he lived. He had never been taught to say his prayers... He cried half his time, and laughed the other half. He cried when he had to climb the dark flues, rubbing his poor knees and elbows raw, and when the soot got into his eyes, which it did every day in the week; and when his master beat him, which he did every day in the week; and when he had not enough to eat, which happened every day in the week likewise. And he laughed the other half of the day, when tossing pennies with the other boys, or playing leap-frog over the posts, or bowling stones at the horses' legs as they trotted by, which last was excellent fun, when there was a wall at hand behind which to hide.

Kingsley... excuse me, I mean 'our experiment', begins his experiment with a child. A soul in the raw, ignorant of good and evil. One can only believe Kingsley, I mean our invention... Ah, screw it. Let's pin the labels to our specimen first, so we can get on with his experiment.

Charles Kingsley, born 1819. Popular author, Anglican priest, Cambridge professor; chaplain to Queen Victoria, tutor to the royal prince. A revolutionary so long as it did not threaten revolt. Founder of worker cooperatives, museums, science societies, schools for the poor. Supporter of letting every respectable Englishman have a voice, even those lacking periwig. Fanatic on keeping the rivers of England clean. Friend to George Macdonald, Lewis Carrol, Charles Darwin…

Within this man are all the contradictions of the 19th century. An enthusiast of new thought, of science and discovery; yet disdainful of faiths, faces and races that do not resemble his own. A champion of the poor, who idealized the rich. A kindly minister standing up for those without voice; so long as they sat silent while well-bred Anglo-Saxon Protestant voices spoke. And Kingsley’s was a gifted voice. His writing offers immediate friendship to the reader. He is happy to wax poetic, then chide in moral tone, then dive into nonsense for a splash of audience laughter. When his friend Charles Darwin debated Huxley whether the hippocampus is the seat of mankind’s genius, Kingsley solemnly presents ‘The Great Hippopotamus Debate’.

Evolution: the concept became key to Kingsley’s reconciliation of Empire and Caritas. He reviewed an advance copy of 'Origin of Species'. The concept provided Kingsley his key to reconciling contradictions of 19th century morality. Evolution showed that a man may champion the poor, yet affirm the natural right of the powerful. One may preach 'do as you would be done by', and yet happily dismiss the mechanical cruelties of industrial and cultural empire.

He frames this strange, bold declaration as… a child’s fairy tale. The Water Babies: A Fairy Tale for a Land Baby. Therein, existence is shown to be ruled by two magical beings. The kind and beautiful Mrs. Doasyouwouldbedoneby, and her stern, ugly sister, Mrs. Bedonebyasyoudid. They represent karmic moral law. Do well, and the pretty fairy shall reward you. Do ill, the stern fairy shall punish you. Kingsley’s genius is to integrate that into biological law and come out with something better than pre-Nazi sausage. For Water Babies is unique, imaginative and moving. A wonder of Victorian fantasy equal to Alice and Back of the North Wind.

Mrs. Bedonebyasyoudid: “Not at all; I am the best friend you ever had in all your life. But I will tell you; I cannot help punishing people when they do wrong. I like it no more than they do; I am often very, very sorry for them. Poor things; but I cannot help it; If I tried not to do it, I should do it all the same. For I work by machinery, just like an engine; and am full of wheels and springs inside, and am wound up very carefully, so that I cannot help going.”

When Tom steals candy, he breaks out in prickles and spines. Behold evolutionary conscience in action! He must work to regain human form by learning goodness. Moral law = biological law. Species and individuals get what they deserve, and become what they deserve. Anglo Saxons rule because they are strong, and are strong because they live right. Alas for the Irish, Americans and Jews. They are degraded by sloth, deceit and superstition. No blame lies upon those whom Nature selects as their masters.

Sounds dull, racist, didactic, not to mention pompous. But therein is the wonder that justifies constructing an experimental Kingsley. Because ‘Water Babies’ manages to be moving and amusing; insightful and magical, hinting of a secret hand guiding all existence from cadis flies to little boys, peasants to kingdoms.

Tom is no tabula rasa experiment, but a mistreated child that the reader comes to love. We watch him learn by hard steps what it means to be a thinking moral creature. Tom befriends trout and salmon, eels and lobsters, learning like T. H. White’s Wart from all the pieces of the whole, accumulating a grand vision of nature.

Did not learned men, too, hold, till within the last twenty-five years, that a flying dragon was an impossible monster? And do we not now know that there are hundreds of them found fossil up and down the world? People call them Pterodactyls: but that is only because they are ashamed to call them flying dragons, after denying so long that flying dragons could exist.

Kingsley’s reconciliation of Empire and Caritas is a fairy tale biology sermon. It is also a wonder of a fantasy novel. Half forgotten, for all its former fame. Not surprising. It is over-spiked with insults to peoples whose sufferings do not need a clever man’s contempt.

Empire never hesitates to align religion and conquest. But empire does not ponder its mirror’s worth. Empire scoffs at contradictions between war crimes and noble values. But can a free-thinking, introspective man with sincere spiritual ambitions assert that another people’s land are rightful spoil for his tribe, and also affirm 'do as you would be done by' as universal law?

Can a man who worked sincerely for the poor, dismiss immigrants as animals, dismiss minorities as cattle, regard power as a measure of moral worth?

Apparently so. The contradictions in the man remain unexplained by our experiment. And the greatest contradiction of all, is that Water Babies remains a story of wonder, an affirmation of love and charity for all the flaws of the mindset of its writer.

Observers might see that as affirmation of evolutionary karma; yet it could also be taken to mean that sincere intention will bring the pilgrim past their own limitations.

Let us take it so, and make that the conclusion to our experiment: In Charles Kingsley’s Water Babies the wish to affirm Caritas is stronger, greater, louder than any desire to justify Empire.